Man in various forms of his existence is the main subject of my artistic work. My works range from real images
of the face and body to ironic or ambiguous representations. Allegories and humanlike fantasy creatures are also an important part of my artistic repertoire.

New techniques and their combinations attract me constantly. After many years of focusing on painting,
I expanded my work to 3D forms that include papier mache and body casting. As some of my pieces combine multiple techniques, they are sometimes a cross between a painting and a sculpture.

“Where there is love of man, there is also love of the art.” 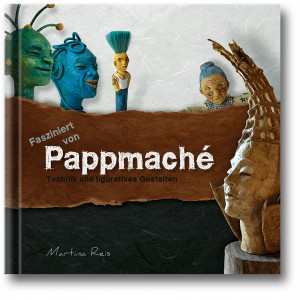 An inspirational workbook for beginners and professionals.

A richly illustrated new edition takes the reader on a voyage of discovery into the versatile world of papier-mâché (also paper-mâché, paper mache) and proves that it is possible to make more of it than just piggybanks and colourful Nana reproductions. The book explains the basics of the papier-mâché technique in an entertaining and comprehensible way; you can try the technique out based on many practical examples (primarily figurative motifs).